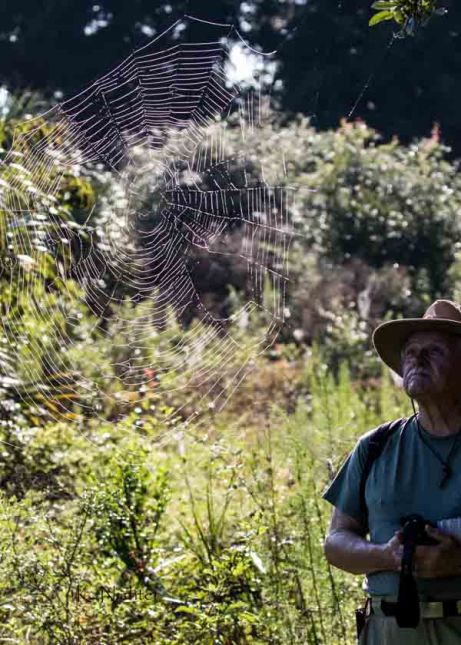 We generally find the very hot and humid days of July and August in this part of Florida, often accompanied by thunderstorms either in the morning or afternoon, naturally limit our nature photography. We go out early morning for a short time, and possibly later toward the evening, depending on the weather forecast and a look at the sky. We avoid the direct hot sun, both for our health and the quality of the photograph. Summer in Florida still offers many wildlife subjects, quite a bit in the insect family including our many species of mosquitoes, but also alligators, lizards, and of course birds. Be prepared to sweat, there is no other way to put it.

So far this summer we also avoid any place that might be crowded due to the serious and continuing spike in Covid-19 cases in our area that started a little over a month ago. We hope it comes under control soon.

The web Karl observes in the photograph above likely belongs to one of the Golden Silk Orb Weavers. The builder of that web was not home as we passed by, though the web appeared in such good shape we doubt she abandoned it.

The Tri-color Heron above fished in this one spot for quite some time, with good luck, catching smaller fish like the one he is about to eat frequently.

This baby alligator shows just the top of his head and snout. The young ones are easy to miss, they blend so well. This one stayed very still near a patch of vegetation, and then moved slightly. My eye caught the movement or I would have missed him.

This dragonfly perched on a branch nearly at eye level so I managed a good look at the shiny emerald color. I photographed a lot of different dragonflies lately, and will be posting those soon.

I originally set this up to photograph the flower, but the beetle came along and burrowed around, so I decided to shoot it instead.