A few weeks ago we attended a talk given by a photographer from NYC on street photography. We knew him by reputation as he creates a variety of images, has photographs in a local museum, and published two books.

This photographer inspired me to try again. He started saying that people recognize two types of street photography, those images which contain people and those that don’t. He presented on street photography with people. I rarely photograph people directly. I prefer silhouettes, distance, faces turned, etc. The stems part from my preferred “could be anyone” vision of the photograph, and part because if in the future I wanted to use the photograph in an exhibition or publication I need a model release which I may not get at the time. He shoots those type of shots in addition to full face shots so I felt somewhat vindicated in my preference.

We visited a small city right after the talk, so I planned to try a few shots. At an outdoor cafe I managed to get Karl un-posed with an out-of-focus woman in the background. A person sat reading nearby, so I tried a discreet partial shot, using the potted plant next to me. OK, but not great. Maybe I’ll try cropping it to take out more of the table at the bottom. The bike had just been left by another patron.

The last shot didn’t work at all. I tried a glass reflection with the image of a man working on a balcony across the street. I can see him because I know where to look. This kind of shot definitely needs some work. 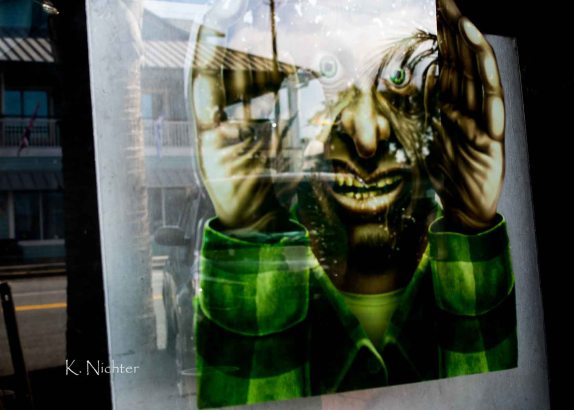 I used the Canon 7D Mark II with the Canon 24 – 70mm lens. I carry a big enough bag/handbag that it fits and the top zippered opening is wide enough to remove the camera and replace it quickly. The bag looks like and is a standard handbag with the straps over my shoulder but are not too long so I can hold it close and it is always available. Most of the shots were aperture set at 11, ISO at 100. I also played around with setting the shutter speed at 1/60th with the ISO at 100.